For those of you who didn’t know, I live in the Houston, Texas area. The recent “polar vortices,” or SNOWPOCALYPSE, as the satire sites call it, have us Texans all in a bother.

Now, don’t get me wrong; there are many of us who take the cold rather well. But there are also many folks who get goosebumps once the temperature drops below 70F! Add “wintry mix” in the form of sleet, ice, and snow flurries and people down here lose their minds. School districts shut down (which is actually needed, as many buses have to drive on overpasses to get the kids to the schools, which is obviously dangerous when they are iced over), people stay home from work and the streets and freeways look like ghost paths.

Humor is a great way to combat depression and laughter actually helps relieve stress, as it produces hormones such as oxytocin and endorphins, which are our natural feel-good body chemicals. With that statement, here are some chuckles for you from various sites that poke fun at us Texans when the cold weather hits (and unfortunately, many of these ring true):

Where can you experience 4 seasons in 2 days?

This is the best we could do.

I had volunteered to work with the Police Department at our city’s annual Winterfest on January 25. I had to report to my station at 8:30am and temperatures were still in the low 30’s, even though it was sunny (and it eventually warmed up nicely). To keep warm, I had a sweater under a fleece hoodie, with a hat under that, gloves and thermals under my jeans. I was told I looked like the Unabomber! The redness under my nose was caused by me constantly blowing it. Yes, even I am not immune to the horror of sub-40 degree temps! 🙂 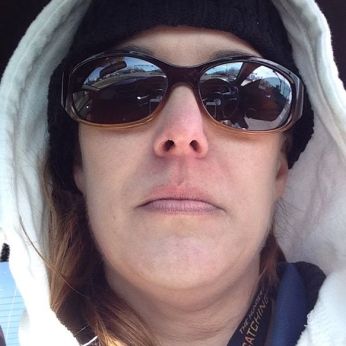 I don’t see a resemblance! 😉

Psychologist Dr. Diane Sanford has been passionate about helping women improve their health and lead happier lives since counseling her first postpartum mom 25 years ago. She has re-focused her efforts on mind/body health, which is a part of greater Self-Care. View all posts by Dr. Diane Sanford